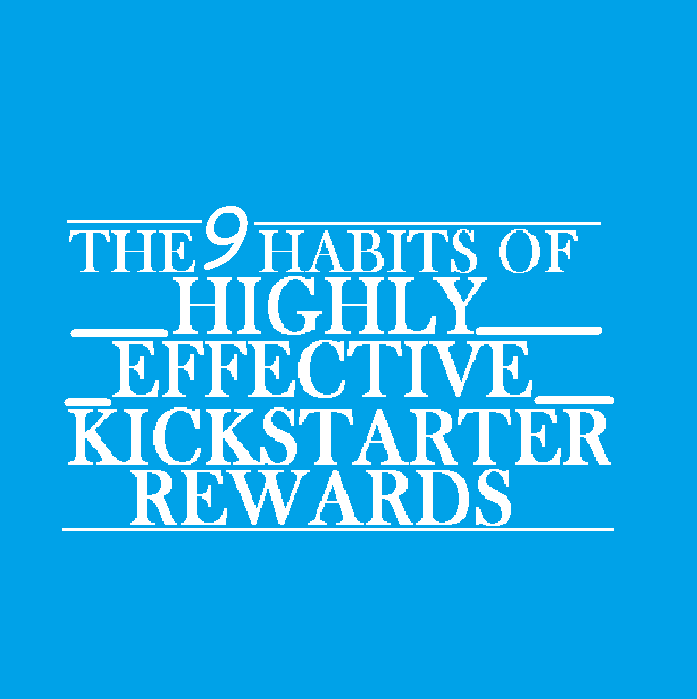 Kickstarter is a business. In its most basic sense, crowdfunding involves an exchange between the campaign creator and the backer. Whether that involves goods, services or just heartfelt inspiration, there is always value for to both sides of the equation. It is the reason why the system so harmoniously continues to work and allows amazing creations to be made every day.

But in crowdfunding, unlike more traditional business structures, you build your campaign around rewards. Rewards are the aspects of your project that make it work, make it flow and allow backers to build up excitement enough to support your dream.

We have all seen Kickstarter campaigns – some blow you away and absolutely capture our attention, while others fall far short in selling themselves to their prospective backers.

The failure to launch is unfortunately hard to avoid. From poor product photos, unappealing videos or boring pitches ,there are so many ways to wreck a perfectly promising Kickstarter campaign.

Perhaps the most frustratingly futile of all is in your rewards. This piece of your campaign requires careful consideration.

So how do you decide upon effective rewards to dole out to your backers? How do you price, place and display the tiers to attract as much support as possible?

This is actually a much more profound aspect of Kickstarter success than the amount seems to suggest. It gives people an easy out. Think about it. How many of your closest friends and family did you email asking for support? What percentage would actually be willing to drop a dime to buy your product?

In all likelihood your project isn’t perfect for everyone. Whether they are strapped for cash or completely uninterested, having a small $1 reward attached makes it easier for others to help you out financially, and even $1 adds a bit of commitment to your campaign as a whole.

Once people invest, even if it’s just a small amount of time or money, they will still feel a sense of belonging and commitment to the cause. Considering all these backers as your early adopters, it seems pretty prudent to think, “the more the merrier”.

For a deeper look into the all-important $1 reward check out this post courtesy of Kickstarter themselves to inspire innovative reward ideas.

Many crowdfunding campaigns out there love to add in t-shirts or other promotional materials to try and bolster their campaign with a pretty, low-level rewards. This can be dangerous however.

While offering a shirt for $25 might seem like a great idea, remember to consider shipping, packaging and production costs of getting the goods made. If you are barely netting a profit on your lower-tiered items it may be a sign you are doing something wrong.

For all these reasons it is a good idea to make sure you are making money on each of your low level campaign rewards to prevent these rewards from hurting you overall. You can fight this and squeeze as much out of rewards as possible by either raising prices or getting creative with your reward schemes.

“Creativity is allowing yourself to make mistakes. Art is knowing which ones to keep.” -Scott Adams

Who says you can’t send each and every backer a hand written note? Why can’t rewards be intangible? Dedicating your time as opposed to your cash can be a great way to work the system and strengthen the bottom-line of your Kickstarter.

Imagine you walk up to the dealership and are shown a BMW and a Ford…what is your first thought? If you are like most you are secretly salivating over the German engineered amazingness but begrudgingly settle for the Ford because the BMW is just beyond your price range.

But if suddenly you had the choice between Lamborghini, BMW and Ford the situation becomes more complex. Obviously there will always be individuals willing to pay a premium for excellence. These are important in Kickstarter campaigns and business in general. Significantly more impactful in our case, however, is the average consumer. And in the eyes of these audiences, they certainly do not want to think of themselves as cheap and quickly eliminate the Ford from consideration. Clearly the Lamborghini is a bit outside their reach, but the BMW is rather reasonable comparatively.

This is the concept of price anchoring. You may doubt these ideas but study after study has confirmed the efficacy of this tactic. It is always valuable to have tiers of pricing. It is the tricky 80-20 principle at work and is worth building into a campaign.

Make sure you accomplish this by having high, medium and lower tiers of rewards to entice backers of all backgrounds. It ensures the highest value per backer and opens up the options for vastly more success than having just one option for products and pricing.

Your rewards are a chance to showcase your creation to the world. As people scroll down your campaign they are greeted with the truly exciting rewards your company is offering to backers everywhere. This simple sidebar is the holy grail of campaign success.

This means it is a great opportunity to share your personality with the world. By adding small amounts of humor or intrigue into the options, you confirm customers’ faith in you and your product. The entire campaign builds trust and anticipation and having appealing rewards with just a hint of funny frequently pushes people over the hump and into becoming backers.

Scarcity is a strong motivating factor in the eyes of all. Whether it’s the last slice of pizza, fighting in line for the new iPhone or even “call in the next 10 minutes” TV offers, the concept of missing out is massive in the eyes of consumers and is a ploy entrepreneurs everywhere use to push their products.

It is your early bird specials in Kickstarter, those limited time deals that work to get backers backing as early as possible and push your project into the ranks of success.

“In preparing for battle I have always found that plans are useless, but planning is indispensable.” -Dwight D. Eisenhower

Although almost everyone coming to your campaign page will take the time to check out your Kickstarter video, you still need to emphasize the aesthetic beauty of your invention.

With the rather design-oriented focus of Kickstarter, Indiegogo and other mainstream crowdfunding platforms, it is more important than ever to make your product photography phenomenal. Take your time or hire an expert…whatever it takes to get beautiful photos.

From action shots to stills and close-ups, also include a good sampling of exactly what backers can expect to get when they work to help your team.

7. Map of the Madness

Some people are visual learners. Other prefer reading. Either way, it is important to show backers overviews in as many ways as possible to avoid potential confusion.

Many Kickstarter creators use aesthetically-amazing infographics to convey their message to the world. Consider creating a simple graphic to show people exactly what comes with each level of commitment.

When presented with too many options we often feel overwhelmed. It is easier to avoid making a decision and reduce the stress of having to choose.

Remember this when working to craft a Kickstarter campaign. Keep it simple. The more reward levels, tiers, options and accessories you have, the harder it will be for people to decide what they want and back your campaign. So don’t get fancy trying to mix and match rewards and making backers’ heads spin.

Some projects even showcase featured rewards, the favorites of the project creators and easy choices for anyone interested in joining the project. Having a simplified menu of recommendations or merely an easy-to-understand, concise list of rewards will work in your favor.

Keep your project focused. You want your rewards to make sense in context of the overall mission and purpose of your company and product.

Unless a reward is somehow tied into the core concepts of your product, story or vision for the company it is probably a bad idea. Like bringing donuts to a Weight Watchers club meeting or strip steaks to a PETA convention,  your creative reward ideas might get a lot of interest, but will it be the right type of interest?

Getting your rewards set up is a massive step towards having a successful Kickstarter campaign. Of the nine tips above we hope at least one really rang true for you and helps you strategize for your next beautifully-executed campaign.

What are some strategies or tactics you guys have found sensationally successful or seriously shortcoming from your past projects? We always love hearing past campaign tales and helping up-and-comers create something amazing with their ideas. If you got something out of this article, as always we would really appreciate if you shared it with others. That is how we grow as a community and strengthen entrepreneurship and crowdfunding for the future.